Continental crude will soon course through Laval on its way to Suncor’s Montreal refinery. After years of hearings and rigorous safety testing, the National Energy Board (NEB) gave Enbridge the green light last week to operate its pipeline from Western Canada and Northern U.S. states.

“[Enbridge] has fulfilled all its requirements and the hydrostatic testing is done,” NEB public affairs director Craig Loewen told The Suburban.

The new source of supply will support hundreds of jobs in East End Montreal.

“We employ 410 people permanently at the Suncor refinery as well as 300-400 contract workers,” Suncor spokesman Dean Dussault told The Suburban. “That’s not including up to 1,000 workers who are employed approximately twice a year to enable us to perform scheduled maintenance.”

The company is also pleased that its Montreal refinery will soon be able to process cleaner North American crude, rather than rely on imports of overseas oil, often from dodgy despots.

“It’s a much higher-quality product,” Dussault said in an interview. “A majority of our feedstock was coming from tidewater in the Atlantic basin—essentially crude coming from countries like in the Middle East and [West] Africa.”

“It hasn’t been very easy during the past few decades here in East Montreal,” he observed. “We’re the last refinery to remain here, where once there were six.”

The NEB decision, Sept. 30, permits Enbridge to start shipping oil eastward at 72 percent capacity. To reach full capacity, it must notify the NEB ten days before each staged increase in operating pressure.

“There are requirements in place during the operation of the pipeline,” she said in a telephone interview from NEB’s Calgary headquarters.

Enbridge spokesman Graham White was unable to specify the date when crude will recommence coursing through the pipeline.

“There are still some technical preparations that are required and line-fill is not an exactly timed process,” he said in an electronic-mail reply to The Suburban’s query. “Once Line 9 is returned to service, our goal is to operate it safely, as we have done for close to 40 years.”

The project to reverse the flow earned the support of Quebec labour unions and the former Parti Québécois provincial government. 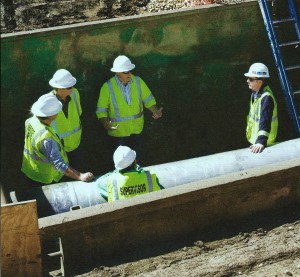