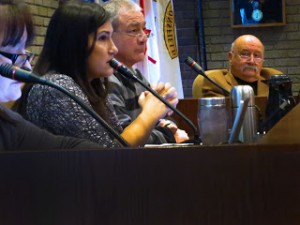 Beaconsfield’s demolition committee voted, March 13, to let Batshaw Youth and Family Centres demolish its premises on Elm Street, to make way for the first phase of a $50 million facility for troubled youth.

During the meeting, committee chair Karin Essen patiently responded to residents who are concerned about the project, explaining that the city doesn’t have the leeway to reject Batshaw’s request on a whim.

“The Quebec municipal code says that if an applicant meets the conditions, then the city must approve,” the city councilor emphasized, “otherwise Batshaw could sue the city.”

She explained that if no change of zoning is involve, if the purpose of the site is not chaged and if the cost of renovating the existing building is unjustified, then the city must approve the proposal, just as it would have to for any other applicant. Beaconsfield official Nathalie Libersan-Laniel said that the city received 76 letters of objecting by the March 4 deadline.


Resident George Bourrelle asked what would become of the Portage youth drug rehabilitation program, which has occupied the site for the past dozen years.

Essen replied that the city is actively exploring what other provisions could be made for Portage.

She added that, at the insistence of Councillor Rhonda Massad, Batshaw has agreed to the city’s wish to pass a special dispensation that will permit Portage to occupy its existing site for the next 18 months, until construction of the first of Batshaw’s buildings is complete.

“It was the city’s idea to delay,” Essen disclosed, crediting Batshaw’s flexibility. “They were quite willing with respect to this demolition. They haven’t done anything wrong.”

“Our concern about Portage is the kids,” added demolition committee member Wade Staddon. “We plan to use the flexibility we have in the bylaw to accommodate Portage. We came forward with that, and Batshaw agreed.”

Essen said that individuals have until April 12 to appeal the demolition committee’s decision. She confirmed a resident’s apprehension that the law does not provide an appeal process for any subsequent construction proposal that the city might approve.

She mentioned that a recent fire safety inspection of the existing building on the site raised concerns that a blaze could spread to the adjacent woods which, she added, Batshaw has promised not to cut down.

However, Portage staff member Michelle Descoteaux reassured Beaconsfielders that the premises they occupy is safe.

“Firefighters came today and we passed their inspection,” she told the meeting. “The safety of the children is our top priority and we have fire systems. A lot of work has been done to ensure that the kids are not in danger.”

Several citizens expressed their dismay at the lack of consultation by Batshaw and their perception that they have been presented a fait accompli with no attention paid to their concerns.

Essen responded that the appropriate venue to express those concerns would be the upcoming city council meeting, March 25.