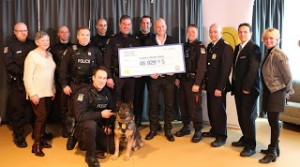 The Martin Matte Foundation received a cheque, Feb. 12, to help head trauma victims, thanks to the popularity of a Laval police calendar that features photos of the canine members of its cynophile squad.

During the past four years, the Laval police canine squad has raised nearly $155,000 for the charity. Its 2013 calendar proved exceedingly popular and garnered $46,929 to help people who have suffered head and brain injury, as well as their families.

The five dollar calendars went on sale in November at IGA grocery stores in Laval, and were also available through the internet at www.fondationmartinmatte.com and by sending a cheque payable to Fondation Martin-Matte to 3095 Autoroute Laval West H7P 4W5.

The fundraiser is run by police officers who vowed that every cent collected would be remitted to the charity.