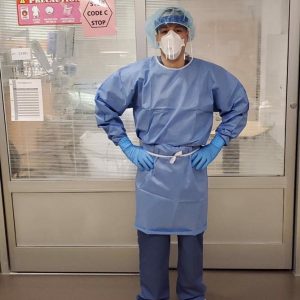 Quebec’s health authority puts the public at risk when it tells people to get to COVID-19 test centres by ride-sharing services, warned Alexandre Magdzinski.

The Quebec Nurses’ Association vice-president sounded the alarm after interviewing a nurse who had just tested positive for the SARS CoV 2 virus.

“She has been very vigilant in monitoring her temperature and symptoms daily, and called Health and Safety to report it,” he said. “She doesn’t have a car. She usually takes the bus, but can’t if she’s sick. She was told to take Über to the test centre to get screened.”

Now that the nurse has tested positive, she must complete two follow-up tests, after she completes a mandatory two-week quarantine.

“She asked them ‘now that I know I’m positive, how do I get [back] to the test centre. I can’t use the bus or anything,’” Magdzinski recounted. “Health and Safety replied, ‘Just pay for an Über to go there.’ They did not tell her to alert the driver that she is going to get screened, or whether other information ought to be passed on to the driver.”

“If the government direction is to take an Über to the test centre, that opens another conduit for the virus to spread,” he explained. “She was sitting in a confined space, less than a metre from the driver. He’s now technically exposed and should be quarantined himself, if he has not taken the proper precautions.”

Megdinski added that emergency rooms have recourse to specially equipped taxis whose drivers have personal protection equipment and have been trained to employ proper decontamination protocols, after they transport a passenger who might carry the deadly virus.

He suggested that it would serve public health objectives well during the pandemic for the Health Ministry to arrange to transport all suspected COVID-19 carriers to-and-from these test centres, rather than allowing them to take taxis and other forms of public transportation.

“It’s a question of having enough equipment to protect them,” he said. “It’s worth it, given that every person who is infected has the potential to infect two to three—and sometimes up to ten—other people.”

Other countries have implemented at-home testing for symptomatic COVID-19 patients.

“Here, we’re still telling people to go out and endanger the public to go get swabbed,” Magdzinski observed.

He underscored that he is not bashing the government in bringing this danger to public attention.

“The point is to alert the people on top, because there’s a huge [communication] gap between the front lines on the ground and the people who [formulate] broad policy directives to prevent the issues that we’re seeing on the front lines,” Magdzinski concluded. “Über is not the best practice.”

Magdzinski’s previous warnings have proved deadly accurate. Three days after he sounded the alarm about eldercare being “just a disaster” last week, the Quebec government acknowledged, April 10, dozens of grisly deaths in seniors residences in the province.