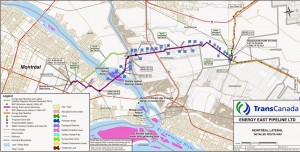 Applications closed yesterday for prospective participants to present their viewpoints during pending National Energy Board (NEB) hearings on the Energy East Pipeline.

Energy giant Transcanada Corporation has filed a 30,000-page application to convert an existing gas pipeline to carry oil from Western Canada to Cornwall, Ontario. It also wants to build a new pipeline to carry the crude thence eastward through Quebec to Atlantic Canada.

“We have issued letters asking Transcanada for additional information,” O’Donovan said in a telephone interview from NEB’s Calgary headquarters. “Once NEB determines that [the application] is complete, it will issue a hearing order which will outline the hearing process and [identify] the interested parties.”

The planned pipeline will pass to the north of the Montreal region, but Transcanada plans to connect an offshoot at its proposed Mascouche, Quebec, pumping station, whence it will wend through Terrebonne and Laval in making its way toward Montreal’s Suncor refinery.

The line is projected to span a muskrat nature reserve on two small islands where it will traverse the outlet of Rivière des Prairies between Laval and Montreal. However, Transcanada has offered to build a broader alternate crossing upstream that will skirt the muskrat reserve, if need be.

“When it comes to the nature reserve, we will ensure that the pipeline is buried very deep beneath the ground and ensure that the land is restored to the way that we found it,” Transcanada spokesman Jonathan Abdecassis told The Suburban. “Also, where it crosses waterways, we traditionally use thicker-walled pipe and put extra sensors and one-way [anti-backup] check valves at either end.”

“Pipelines are the safest way to carry oil over long distances,” he underscored. “Right now, Quebec is getting some 700,000 barrels of oil a day from foreign sources and wants to replace it with Canadian oil by tying into refineries like Suncor which permits it to choose the most cost effective options to obtain oil.”

City officials hope to meet with the main proponents of the project to work out their concerns.

“This is something that we don’t take lightly,” Laval executive committee vice-chairman David de Cotis told The Suburban. “We want to sit down with the federal government and negotiate the environmental [dimension].”

“We want to discuss what are the risks and mitigation plans, and suggest some of the issues and risks that we have identified and work with them to find the best way to resolve each risk,” he said in an interview.