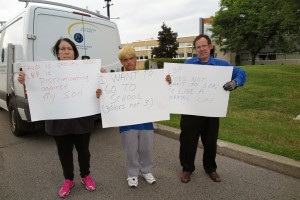 Lester B. Pearson (LBPSB) school board officials are scrambling to sustain services to students, after the province slashed an additional $4 million from the coming year’s budget.

“I was expecting cuts, but I didn’t expect them to be this deep,” said Suanne Stein Day.

In an interview following the council meeting, the LBPSB chair explained that the Ministry of Education has cut its grants for students with special needs and to improve students’ graduation rate.

During its Aug. 25 council meeting, LBPSB commissioners unanimously passed a budget that has cut educational support by more than $2.6 million—5 per cent less than last year. The second-biggest chop is nearly $884,000 to administrative overhead, a 6.4 per cent reduction.

LBPSB hopes that profits from teaching foreign students, who pay for their education here, will help to fill the gap. It expects its revenue to grow 1.25 per cent next year, with nearly half of the $3.4 million increase to come from “other operating revenues”, rather than school taxes or Education Ministry grants.

Expenses continue to climb, despite fewer students, to a projected $277.8 million, creeping up $3.75 million over last year.


Stein Day said that it remained unclear what staff cuts the squeeze might trigger. Assistant director general Steve Balleine told support staff union leader Anita Nenadovich that, at this point, he didn’t foresee a change in the formula used to calculate the number of integration aides that LBPSB employs to help special needs youth in the classroom.

“The number of youth appears to be constant,” Nenadovich told The Suburban afterward. “The quality of their inclusive education can only be facilitated with the dedicated work of our support staff.”

“The [staff] allocation process continues to unfold,” she explained in an interview. “At this point I’m going to remain optimistic that support staff requirements will be met and the negative effect of this year’s school board cuts will be kept to a minimum.”

Taxpayers should be ‘mad as hell’

“[The government] is collecting more and more [taxes] every year,” said LBPSB vice-chair Angela Nolet, who is running for chair in the Nov. 2 school board election. “What does that say to the taxpayer?

“To me they should be mad as hell because that money is given to support the community and going directly where it should be,” she told The Suburban. “It isn’t always, and that’s a sad review of what the government is doing to meet its financial obligations.”

“Ever since the inception of the Pearson board, parents have complained about the lack of funds for special needs, ” said Chris Eustace, who is also running for chair in November. “There is way too much emphasis on technology at the expense of personnel, such as integration aides, who help kids to become useful members of society. If we don’t help them now, they will a burden on society and the taxpayer.”

Stein Day told The Suburban that LBPSB intends to complete its program to install universal wi-fi internet acesss and acquire laptop and table computers for its schools.

[Reporter’s notebook: All the figures in this report are based on LBPSB projections. According to Stein Day, audited financial statements for the 2013-2014 school year will not be available until October.]

David Schulman and his parents Shelley and Stanley Schulman have been picketing LBPSB headquarters since last week. They want better education options for the 18-year-old adoptee, one of only five youth in Canada with a rare, Chernobyl-related ailment that affects their learning ability. “This school board is responsible for special needs until the student turns 21,” explained LBPSB director general Robert Mills. “I understand that David Schulman was [this year] offered the same education option as he was in the past.”
(Photo © Robert Frank)