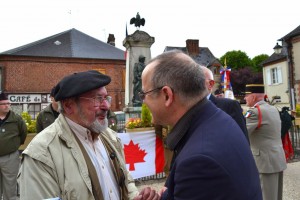 CHARLEVAL, FRANCE—Uniformed soldiers in fatigues bearing the French tricolour flag stood together with a piper in front of the village cenotaph, which they had festooned with two handmade Canadian flags, June 1.

Stunned by the unexpected grandeur of their welcome, I blurted “Bon Dieu, ils ont organisé une garde d’honneur,” to my French host, as we arrived.

Charleval Mayor Denis Lebaillif and French Resistance veteran Guy Pesier turned what I had expected to be a quiet, informal get-together over coffee into an outpouring of appreciation for Canada.

To this day, the 1,823 residents of the town cherish the memory of Flight-Lieutenant Alan Cashion, an RCAF pilot who died two weeks after D-Day, when a Luftwaffe adversary shot his Spitfire down over the Upper Normandy village.

All the children in Charleval learn that he died trying to help liberate their village from Nazi occupation.

Two years ago, Charleval wanted to dedicate a new bridge in his name, but were stymied by a French law that required a family member’s consent. However, F/L Cashion was an only child, and his long-dead parents had no other descendents.

A series of reports that I wrote helped them to find the offspring of one of F/L Cashion’s cousins, Peter T. Harrison, who gave Charleval the green light to proceed.

“We appreciate what you did for Charleval,” said Mayor Lebaillif.

I explained that The Suburban’s reports also had a reciprocal effect: They helped Canadians to remember the Notre Dame de Grâce resident, in an era when fewer and fewer of us recall what the wars were about, let alone individual combatants.

Commander Van Ryssel led the contingent in three separate minutes of silence in remembrance of F/L Cashion’s sacrifice: one at the municipal cenotaph; another at a memorial pillar which citizens erected at the spot where he met his end after his parachute failed to open; and a final memorial at his well-tended gravesite, where the Canadian flag has flown continuously for the past seven decades. We ended, with the Canadian and French national anthems. Guy Pesier gave me a Forces Françaises de l’Intérieur armband, worn by members of the French Resistance like himself during the war.

Our hosts followed up with a vin d’honneur at city hall to wrap up their expression of appreciation for what this newspaper had done.

The occasion crowned a day spent at the Juno Beach Centre, which will commemorate on Friday the 14,000 Canadians who landed there 70 years earlier to push the Germans out of France.

After the guides whisked us through the daunting German defenses that the young Canadian soldiers overcame there on June 6, 1944, we toured the museum, which is filled with artifacts of the conflicts and ample information, including videotapes of first-hand testimonials by many veterans—several of whom are now deceased.

The museum tour culminates with a poignant, 20-minute D-Day documentary film. Most visitors I witnessed exiting the theatre had tears in their eyes.

Visitors to Courseulles-sur-Mer and to Charleval will witness the extraordinary esteem in which Canadians are held. It was touching beyond all expectation and well worth the trip.

World War II French Resistance veteran Guy Pesier (holding a copy of The Suburban) credited the newspaper with helping to preserve the memory of Canadians who lost their lives while putting an end to the Nazi occupation of his country. To his right, Robert Frank sits beside a sign that reades “Charleval à été libérée par nos amis canadiens”. Seated at left are Charleval Mayor Denis Lebaillif and Commander Georges Van Ryssel.