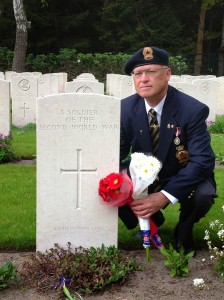 On April 8, the Canadian War Museum (CWM) will kick off a special program called Supply Line at its World War I centennial gala.

“CWM has opened up its underground vaults and has unearthed from storage World War I uniforms, artifacts and very emotional letters written by young men in the trenches back to their moms,” Dr. Paul Kavanaugh told The Suburban in an interview, “as well as their dying words to a nurse or a doctor.”

“The original letters are being photocopied and will be shipped to schools all over Canada with other relics and a teacher’s guide,” he told The Suburban in an interview, to coincide with the 100th year since the outbreak of World War I.

For the past five years, the soft-spoken Laval periodontist has steadfastly promoted and raised funds to support veterans and to connect students throughout the country with what it was like to fight in conflicts like the two world wars as well as in Korea and Afghanistan.

Dr. Kavanaugh started his own charity, called Operation Veteran after a chance encounter during a trip to Ottawa in 2009. There, he and his son witnessed an otherwise proud, decorated veteran in his 80s break down in tears because he couldn’t afford to pay for his own lunch when he reached the cashier with his tray at the CWM cafeteria.

“It resonated from province to province,” he recalled.

Soon Operation Veteran had gathered enough funds to provide a meal for any veteran who visits CWM.

“It’s geared toward honour and respect for veterans,” Dr. Kavanaugh said. “We have served 5,000 meals since 2009, far surpassing anything that CWM expected.”

The success of Operation Veteran led him to use funds flowing from across Canada to create education programs and make them available, free-of-charge, via the Internet.

“Teachers tell me that Operation Veteran is a confederation project, and that they’re proud to support it,” reported Dr. Kavanaugh.

Yesterday, he took time off from his periodontal practice to visit the village of Veteran, Alberta.

“It’s a tiny community halfway between Edmonton and Calgary in the middle of the Badlands and dinosaur bones,” he said. “Principal Debbie Letniack and 28 students and their parents raised $32,000 last year and flew to Ottawa for Veteran’s Week commemorations.”

“Like so many Canadians, these people support our military and are proud of the men and women who wear the country’s uniform,” Dr. Kavanaugh added. “They traveled on their own expense to bring their donation in person. That’s why I wanted to go there and meet them to acknowledge their contribution.”

“As a volunteer, I pay for all my costs out of my own pocket, so every nickel that comes in goes toward veterans and educational programs at CWM,” he concluded. “Nothing is wasted on overhead. That’s why schools are signing up in droves, because they know that the money is being put to good use.”

Dr. Paul Kavanaugh attended a 2013 ceremony in Netherlands to honour Canadian soldiers who fought for to liberate the country during World War II.