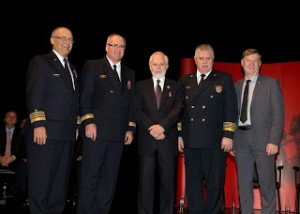 Looking dazzling in their crisp uniforms, Laval’s firefighters gathered at Marcellin-Champagnat Theater, Nov. 26, to congratulate their peers who distinguished themselves through acts of bravery. Courageous citizens who had selflessly intervened in emergency situations were also honoured.

Numerous medals, certificates and congratulation letters were handed out to 12 citizens who helped to save lives by acting quickly and bravely in the Yvon Chartrand arena, Villa Ste. Rose and St. Vincent de Paul private residence fires. Amongst the recipients was Christopher Noonan, who received the Lifesaver Medal for his intervention in the 1000 Plessis St. fire.

More than 20 firefighters were then invited onstage to receive their official nominations and promotions, and a new recruit, Andréanne Lemay, was sworn in at the Prevention division.

There followed a heartfelt and moving homage to Lac Mégantic firefighters who intervened to save lives and comfort shocked citizens in the wake of the July 6 train explosion that obliterated the town’s downtown core.